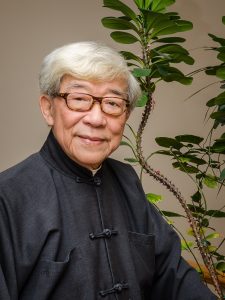 Master Tam was born in Guangzhou, China. In his youth, he was given a Classicist’s education and was exposed to subjects ranging from the arts to philosophy to science, laying the foundation for a long, multi-faceted career. In spite of his involvement in many areas, Master Tam’s lifelong dedication lies in Buddhism. He received systematic training of the rNying ma school of Tibetan Buddhism under the guidance of H.H. Dudjom Rinpoche. In 1986, Master Tam emigrated from Hong Kong to Hawaii and then to Toronto in 1993.

As early as the late 1970s, Master Tam began publishing writings on Buddhism with an emphasis on the teachings and meditative practice in Vajrayana Buddhism. His recent writings include A Study of the Avikalpapravesa-dharani and The Two Truths of the Tathagatagarbha. The first book is a comparative study of the Tibetan and Chinese translations of an early Mahayana text, The Dharani of Approaching Non-conceptuality (Avikalpapravesa-dharani). The latter book is a study and translation of two Tibetan works on the doctrine of Buddha-nature (tathagatagarbha) by the eminent 19th century Tibetan scholar, Mi pham rgya mtsho.

To establish Sino-Tibetan Buddhist studies as a legitimate field in Buddhology, Master Tam helped organized the Sino-Tibetan Buddhist Studies in North America and received the support from many world-renowned Buddhologists. The organization also sparked interests from a number of Universities in China, including Renmin University of China in Beijing, Zhejiang University in Hangzhou, and Sun Yat-Sen University in Guangzhou, in establishing new curricula in Buddhist Studies. Beginning 2008, by invitation, he is the visiting professor at these universities lecturing on the Tathagatagarbha doctrine and its practice.

More on the Nyingma Lineage